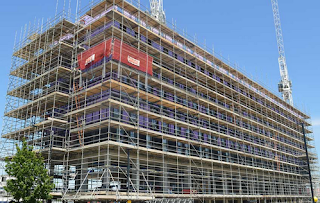 I returned to the office in June as part of a "Return to Office" pilot program because I am, in no way, set up to work from home. During this time, my employer has been doing renovations to prepare for the workforce to return after the pandemic. As part of the renovations, there is work being done on the escalator banks that require scaffolding. All of the escalator banks are 4 floors in height with the exception of one which is five floors in height. I am completely awestruck by the work it takes to build the scaffolding and the talent and skill that goes into it. There are several other trades in the building doing renovation work and I admire and value them all.

The skilled trades have not become irrelevant as society grows in technical sophistication, nor will they, but there is going to be a shortage of skilled trades workers if we don't do something about it.  High school curricula and guidance counselors push college as the future of choice for students; however, it is not the only route to professional success.  I had two fathers involved in racing (both were mechanics) and so was my brother, but I never got involved...and I wish that I had.  I wish that I had learned to build racecars, engines, transmissions, rear-ends, etc., but I was too involved with football and other not so healthy endeavors.  I took shop classes, but I sucked at them, thus never tried to become proficient (FYI - you always suck when you first try something).

Getting back to the trades, we need to start following the lead of Mike Rowe and re-emphasize the skilled trades in schools and trade schools and apprenticeships after high school. I am a proponent of having degree programs that integrate professional programs with trades.  For example, combine a computer-aided machining trade with mechanical engineering or combine carpentry with architecture. I want to partner with the states' boards of higher education and colleges and universities to make this a reality.