I beg to differ Joe Rogan 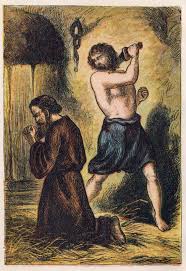 I am a huge fan of Joe Rogan; however, he has repeatedly stated something in which I have a differing opinion.  Joe Rogan, and I am paraphrasing here, says that the difference between a cult and a religion is that in a cult the leader is alive and in a religion the leader is dead. I would like to offer my apologetics for Christianity to the discussion.

My indefatigable truth - nobody would ever willingly die for a lie. Most people's argument against that statement has been that Muslim terrorists die for their religion.  That's fallacious reasoning and here's why.  Muslim extremists have no idea if their beliefs are a lie or not.  For that matter, neither do modern-day Christians, we have faith in the truth; we will not actually know until we die, which is the same for any other faith.

In the case of Jesus, there are several differences.  There is no arguing that the physical man existed and that there was a crucifixion. Two historians, both of which were alive in the natural lifetime of Jesus, wrote about Jesus and the crucifixion (a natural lifetime being a period in which Jesus would have lived had he not been executed).  Josephus, a Jewish historian, refers to the execution of Jesus by Pontius Pilate.  Tacitus, a Roman historian, referred to the same as well as referring to the early Christians in Rome. The natural lifetime context is important because people who actually knew Jesus were still alive during Josephus' and Tacitus' time.  There is no argument that the man Jesus existed during the timeframe that the Bible references and that he was executed (crucified).  The argument is over Jesus' divinity.

Now, let's get to the point of nobody willing to die for a lie.  Of the twelve Apostles who actually knew Jesus, all but one were martyred for their faith, some with more historical clarity than others. Other prominent disciples outside of the twelve who also knew Jesus were martyred.  Here is my argument - all of these men knew the truth, they knew whether or not Jesus was actually who he said he was, they were there during Jesus' life and resurrection.  Can you honestly say that these men would willingly be tortured and executed in very cruel ways if they knew that who they claimed Jesus to be was, in fact, a lie?  I have a hard time believing that, personally and intellectually.  Would you die for what you know to be a lie?  No, you wouldn't. The early Christian martyrs died because they knew the truth.  And that is my truth.

There has been no credible anthropological or archaeological research that has disputed or dispelled the Bible, only confirmational findings.  To Joe's point that the early Christian bible was a product of the Church three centuries after the fact (the fact being Jesus, though the bible refers back many more centuries before Christ, mostly through the Jewish Old Testament), the church actually studied the documentation to determine authenticity and veracity just like scholars do today.  There were points of disagreement within the church; however, they came to a general agreement regarding what should be scripture and what shouldn't. And yes, they knew how to deal with the multiple translations (Hebrew, Aramaic, Greek, and Latin).