As a father of a 19 year old young woman, I'm sensitive to messages aimed at her and how the world is attempting to stifle her through fear, conformity, and gender stereotype.  Below are links to two commercials that my daughter immediately saw as good and bad messages for women...and I wholeheartedly agree.

The first is a TrueCar commercial and the second is a Chevy Silverado commercial.  These are studies in contrast between the wrong message (TrueCar) and the right message (Chevy Silverado).  What do you think? 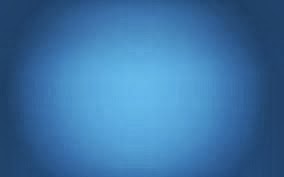 We're in the midst of moving in to our new home and, like most people, we promise ourselves that we will get rid of the clutter.  Easier said than done.

We tend to collect things over a lifetime that begin to weigh us down and make our lives more complex - clutter requires maintenance.  Moving provides a unique juxtaposition of perspectives - on one hand we realize that we can live just fine with a few basic necessities, but on the other hand we see the enormity of our tendency to collect "stuff."

Eliminating clutter and living simply enables a certain clarity and focus on life that we tend to lose in the noise of the every day.  It's also an apt metaphor for the rest of our lives - personally, professionally, and spiritually.
Posted by Joe Gartrell - Outlaw PhD at 9:55 AM

Don't define yourself by your paycheck

You've probably seen this Chevy Silverado commercial before; however, I see it as a perfect metaphor of how to define yourself...and it's not by how you make a living.  When asked, "So, what do you do?", the actor can't really say, but the montage indicates that he and his family actually live life and work is just a small part of it.  Actually, there are 16 total scenes and only two are work related - that's about right.

I can't think of anything so sad as a person defining his or her self as their job yet, more than 9 times out of 10, that's exactly what people do.  It's not to say that someone can't make a living doing what they're passionate about, but is that really what life is all about?  The pediatric surgeon or the cancer researcher are doing important work, there is no doubt about that, but that's not the sum total of their humanity.

Try to define yourself by the totality of you and if the montage of scenes are blank or full of work, create new scenes. 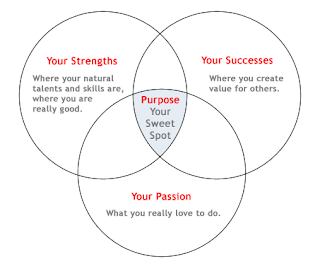 I was reading an article in the latest Forbes magazine about Carl Icahn's recent unsolicited bid for Dell.  The article intimated that this particular deal hit Carl Icahn's "sweet spot" in terms of the cash needed, the size of Dell, the growth prospects, the share price, etc.  This got me thinking about our own sweet spots and why we aren't routinely playing in that space.

Myrko Thum produced the Venn diagram to the left that's simple and concise - our sweet spot is at the intersection of our strengths, where we've been successful before, and our passions.  How often do you find yourself there?  For most of us, we're usually dancing around the edges, but rarely taking the tough journey to where our sweet spot resides.

Take the time to really dissect your life and determine  where you want to spend the remainder of your time in this world.  Don't just take a cursory look, but take a deep dive.  Forget your weaknesses - shoring up your weaknesses is a Quixotic endeavor at best; focus on your real strengths.  Use StrengthsFinder, it's an eye opening tool.  Don't dwell on minor successes, concentrate on those that created real value.  And your passions are easy - if you were suddenly free of all other obligations and had unlimited time, what would you be doing?

Now go find your sweet spot, but more importantly, take the journey there and live there the rest of your life.
Posted by Joe Gartrell - Outlaw PhD at 10:08 AM 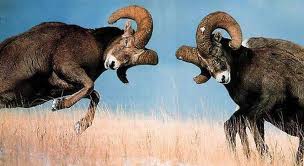 Tension is not something that most of us consciously pursue; however, tension is a fertile frontier in which creativity and innovation hang out.

Tension between data is accepted as a norm in scholarly research.  All data is dependent upon the reference frames from which they are observed.  What is significant and meaningful in one reference frame might not be significant and meaningful in another.  The data are never wrong, they are what they are, but inferences from the data can be wrong.

Just as scholars don't let the tension between data stop further inquiry, neither should you let tension between ideas, tension between people, and tension between differing reference frames halt your inquisitiveness and sense of discovery.  Newness, the unique and the novel, always creates tension.  Wade in to it, use it, and above all, don't shield yourself from it. 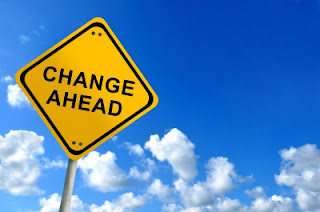 A game changer is an inflection point that significantly alters a piece of your reality and can come as a person, an event, a confluence of circumstances, a technology, an issue, and a host of other ways.  Most people will never be part of a game changing event and even fewer will be a game changer.  Most of us live in managed conformity, never pushing out to, in Daniel Boorstin's words, the fertile verge.

Our culture, and mankind in general, abhors changing the game.  Our nature is to conform and obey, to not rock the boat.  Game changers travel against the prevailing winds of conventional wisdom (which is generally the opposite of wisdom, a form of group think).  All of that said, our progress as human beings owes everything to the game changers; those people, technologies, and events that have shaped us, our culture, and our world.

A game change doesn't have to be a civilization shaker; it just has to be that significant alteration of a piece of your reality and everyone is fully capable of being a game changer in their world.  What are you doing to change the game, to advance knowledge and the human condition?  That should be your art, your reason for getting up in the morning.  Now go do it!

Photo by mrpuen.
Posted by Joe Gartrell - Outlaw PhD at 10:36 AM 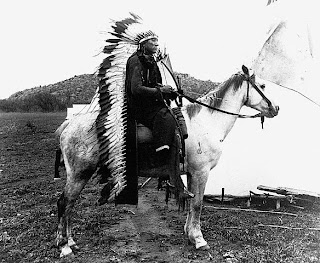 In his book, Empire of the Summer Moon, S.C. Gwynne weaves a superbly researched story of the Comanche nation.  The Comanche were a horse culture like no other; their horsemanship was unequaled.  Unlike other Indian nations, the Comanche bands never fought each other.  The Comanche were never conquered by the Spanish, the Mexicans, the Texans, or the Americans.  Though highly aggressive and hostile to outsiders, even to the point of barbarism, the Comanche were a model of a truly free culture, one that we could, and should, learn from today.

Gwynne describes a society that has no hierarchical structure, no consistent body of law, no police, and no judges - essentially a system of private law.  And it worked.  Comanche leadership was based entirely on merit.  Every man was free to create his own raiding party - to recruit, to plan, and to carry it out.  Head war chiefs became so because they were good at recruiting war parties and successfully carrying out raids - if you were good, other men would naturally want to be part of whatever you're doing.


"The Comanche male was thus gloriously, astoundingly free.  He was subject to no church, no organized religion, no priest class, no military societies, no state, no police, no public law, no domineering clans or powerful families, no strict rules of personal behavior, nothing telling him he could not leave his band and join another one, nothing even telling him he could not abscond with his friend's wife, though he would certainly end up paying somewhere between one and ten horses for that indulgence, assuming he was caught.  He was free to organize his own military raids; free to come and go as he pleased.  This was seen by many people, particularly writers and poets from James Fenimore Cooper onward, as a peculiarly American sort of freedom.  Much was made of the noble and free life of the American Savage.  It was, indeed, a version of that freedom, especially from onerous social institutions, that drew many settlers west to the primitive frontier."

It's hard to imagine that kind of freedom in America today; however, it's what I espouse as a sovereign individual.  We should have the freedom to choose a life that we want, free of government intrusion and social obligation.  Does this type of freedom have risks?  Yes, every individual would be responsible for their own decisions and actions, but they would be free to succeed, to fail, to keep trying, and to move in any direction that they see fit.

I choose Comanche freedom and I reject anything less.