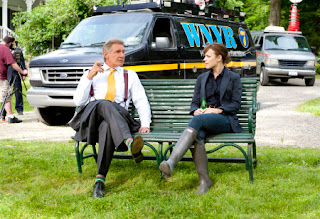 Last night I watched the movie "Morning Glory" starring Harrison Ford.  He plays a grizzled veteran newscaster, Mike Pomeroy, who is contractually forced to take a position as a co-host of a failing morning show.  He absolutely abhors his situation and the show's new producer (ably played by Rachel McAdams) is tasked with an almost impossible mission to save the show by using the gravitas of Mike Pomeroy.

It looks like disaster until Mike decides to use his contacts to go after a corruption story involving the governor.  The story is a hit and the new format saves the day.  With that, Mike loosens up and becomes open to more "fluff" pieces that morning shows are known for.

I'm leaving a lot out of the story, but there's a lesson here - allow people to do what they do best, leverage their talents for the overall performance of the organization, and wrap the job around the person rather than the person around the job.  You will get a much higher level of performance and, when people are in their groove doing what they do best, they're much more likely to be open to new things.  Let's call it "The Pomeroy Effect."
Posted by Joe Gartrell - Outlaw PhD at 1:08 PM